For the last few weeks to a month I've been focusing on updating my 2 networking pages on MySpace and Facebook, which I've had for about 2 years now, but only really filled out with basic info and images. I still don't understand the entire concept behind the whole 'networking' concept of it. Maybe a testiment to my 'old' age and inability to connect, ironically, with today's youth.

Damn, some of those games on Facebook are somewhat addicting, as if I haven't found more distractions in life. *sigh* I especially like My Heroes Ability and Who's got the Biggest Brain. Those who know those apps, can I get a "wah-wah."

Other than those sites making you take a good look at your own life and where you've been ("I watch way way too many TV shows..." "What books have I read that didn't require an exam at the end?..." or "I need to connect with more people who's name doesn't end in the suffix: .jpeg"

But for some reason, I've found that it's working on some level. I've managed to come into contact with friends and classmates from years gone by. It's very nostalgic and surprising in some cases. Most are thousands of miles away, living lives in their own fashion, and having adult problems and situations. Some are eyebrow-raising and some obvious, as some of you may know from contacting your old friends. And for those still young enough, you WILL know what I'm talking about in future years to come.

On the other hand, it's been very lucrative in terms of people seeing my artwork and requesting commissioned art pieces, images for their band, or even just poster prints of my stuff. Freelance work has also been up a bit because of it, which is probably caused the lack of artwork on my behalf here on DA. Some just request that it not be shown by me just yet, and some prefer not to show it at all. Which is cool by me. As long as you keep those checks coming.

Anywho, I have tabled a lot of art pieces and I'm at the point where I'm experimenting with styles just for my own education and evolution of style. Oh you'll continue to see propaganda pieces and pin-up girls, but maybe with 3 breasts or with more dog-headed dissidents and somesuch.

But for those interested in the networking sites, I figure I'd post it here for all you MySpace and Facebook addicts to connect.
MySpace: (mention this blog and I'll speed your application through)
Facebook (This is more of a Fan Page created by me, but you can still "become a fan" and add a little icon to your page)
Posted by DomNX at 11:12 AM No comments:

Uncle Sam has been generous to us this year, by giving us a big tax refund, which we immediately spent on a new Apple 24" iMac. 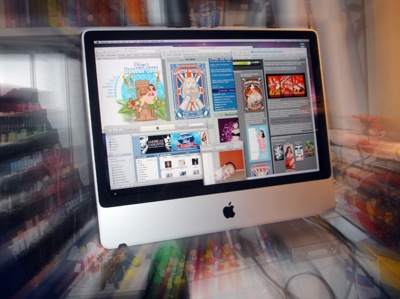 We actually got this guy a couple weeks ago, and because of either busy schedules and whatnot, weren't able to bring it out of it's box and started slowly transferring files and just cleaning out the old computer of old crap that we don't need. After working on this bad boy for the past couple weeks updating and transplanting files from my old hard drive,
It's hard to believe I've been working on a CRT monitor and on OS9 all this time. So much detail, and I can open, like, 3 web pages side by side...ooooohhhhh...

What sucks is the bootlegging purchasing of all the new programs. *damn you Apple!*

Now I can get more work done faster!