Happy Earthday! For this piece I created a modernized Mother Earth. I like this piece and its color combinations. 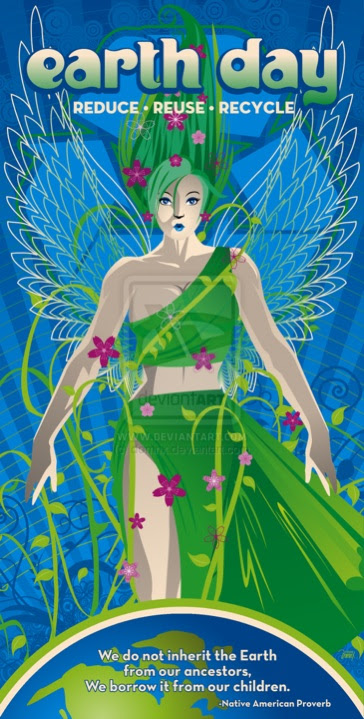 For you fans of social networking, along with my MySpace and Facebook Fan Page, I've added Twitter.

I admit, this one is the one I LEAST understand. It's 'solicitated stalking' for the lazy. I guess it's ok if you're famous and need to update the paparazzi that you're grabbing a latte from the corner Starbucks, or if you're a business that wants to inform customers of just released items. So as an artist, I guess that would come in handy. But, I'm usually a private person, and I know the internet has de-personalized us as people, but I guess these type of social networking sites has been a backlash to that. So, who am I to question what's 'hip' and 'new.' You can find the app on my DA homepage or else have it sent to your mobile phone.

Though I don't 'follow' anyone per se, (because I don't really want to know if you're on the toilet pinching off a loaf, or that you're seeing the neighbor's dog hump your cat on the lawn) I don't begrudge anyone from seeing what I'm doing (as uninteresting as it seems) when it pertains to general art ideas or pop culture items of interest. Go ahead and comment too. I don't mind, and I might even comment back! Hell, I might even make stuff up just to seem like my life is interesting.
Posted by DomNX at 11:31 AM No comments: