Saw an article in the paper saying that this year marks the 50th anniversary of the Smurfs, so I did a little tribute piece to the 80s Saturday morning cartoon.

The basic smurfs are there, along with a few that should have been there.

This is harder than it seems. Customizing each individual smurf is tedious. 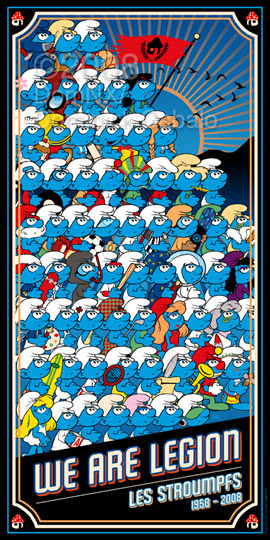 And speaking of the ripped situation, the site owner wrote back saying that he was sold the file by another 'artist' claiming he owned it. He said he would tell the webmaster to take it down immediately...Yeah, we'll see...
Posted by DomNX at 1:11 PM No comments:

Lastly, I should explain my politics, (though I feel I shouldn't have to). There's a couple of you who feel that the messages in my propaganda pieces are totally "un-American." I totally disagree. I'll tell you why: I feel that it's American right to question our own system; To make light of injustices and to call on the government when we feel they've screwed us in some way. Whether it be by writing a news article, or by calling your representative, or doing a measly art piece. We all hope to better our way of life: as Americans; as human beings. As for my soviet propaganda pieces, they do not reflect a love of communism or any such political agenda.

I'm not a political guy, far from it. Politics is the last thing on my mind in whatever I do. But that doesn't mean I don't know when the little guy is getting screwed or when a certain group is given the shaft.

I just love the colors of that era, the blatant imagery and the straight-to the-point message they have, whether obvious or implied. It's graphic design on an urban level. It's art spoken to the man on the street. Hey, just because I like Michael Jackson songs, doesn't mean I like to have sleepovers with little boys, y'know? Same goes with the art of certain eras. Just because I like an art style, doesn't mean I like the fashion, politics, or movies of said time.

Will it change the course of history? Probably not. But I feel it brings something new to the table, and at least it makes you think. If you don't like thinking then skip over me and go to the manga section or to that guy who traces pics of his girlfriend/brother/dog/etc in vectors.

So if you don't believe in what I do, or what I say, then by all means, avoid me and my art. Unwatch me, but don't take a crap in my yard. Post your own journals and post your own deviations about your own beliefs. But don't go writing to me trying to push me into your belief system, and insulting me, especially if you're not one of the disenfranchised I'm standing up for. Makes you look like a jerk. And It'll only strengthen my views. You have a better chance at commenting me on my color theory or composition and content.
Posted by DomNX at 1:07 PM No comments:

First, I'm getting ripped off on The Art of the Revolution They're selling canvas prints on a handful of lo-res jpegs taken from either my personal website or DA gallery. Actually they're kinda expensive, and cheaper to get on DeviantArt, really.

When I first hear this kind of news, you think "Oh wow, I'm actually a good enough artist for people to steal from!" which is immediately replaced by "WTF! I'm gonna tear these guys a new one for stealing my sh*t!" I'm not the only artist they're stealing from, so this makes the owner a multiple-douchebag. But thanks to the Deviants for alerting me to this infraction; I'm talking to some attorney friends of mine to weigh my options.